If you have been to Hat City Kitchen located in New Jersey’s Valley Arts District, I am sure you have noticed the folk inspired are pieces and quilt as the backdrop of the stage. They have been there since the bar/restaurant opened six years ago. The detailed, and intricate pieces have become such an important aspect of the establishment, they might as well be a part of the infrastructure.

Earlier this year, HCK recently undergone a makeover with new management, chef, paint job and more. If you like the bright new color scheme and these pieces, thank Kimberly Maier. The talented artist turned arts entrepreneur was able to give me an interview and share some of her other artwork and accent pillows from her Easy store.

Patricia Rogers: Nice to finally meet you. Can you tell me a little bit about yourself

In my youth I lived in San Juan Capistrano, Ca, a town south of LA & north of San Diego. There I was exposed to Mexican culture. My father owned a small hotel in the artist colony of Laguna Beach and employed many Mexican immigrants. Our family traveled in Mexico and often took camping trips to Baja California.

Talk about your journey as a visual artist

My mother brought back folk art for the house, which I loved. My grandmother, a folk artist herself, incorporated Mexican crafts into her work and made paper-mâché jewelry and pounded-tin retablos. I also studied Spanish in school.  As I became older, I wanted to look more closely at this captivating, foreign country and enrolled to study at the Art Institute in San Miguel de Allende, a picturesque artist community in the heart of colonial Mexico.

What inspires you about South West and Mexican art?

During my studies at the Institute, I became aware of the painter, Frida Kahlo, wife of the great Mexican muralist, Diego Rivera. I was moved by the emotional honesty expressed in her self-portraits and confessional narratives. Frida, figuratively, became for me an artistic and spiritual mentor.

I completed my Fine arts degree at San Francisco State where I met and married a fellow art student. Because of job opportunities, we relocated to the east coast, eventually settling and raising our family in South Orange, NJ.  It was here in South Orange that my California roots and love of Mexican culture crystallized into my own artistic language. I began constructing large, hand-crafted assemblages with found objects to tell a story.  I used a range of utilitarian and decorative materials to build my assemblages, including cloth, paper, baskets, beer cans, and crockery to name a few. Mexican folklore and immigration became some of the themes in my work. 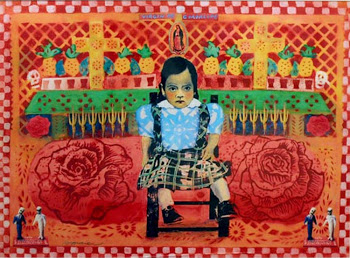 Living on the east coast in such close proximity to NY city also exposed me to the work of many accomplished artists. Favorites included mixed-media artist Romare Bearden, painter Jacob Lawrence, and Chakaia Booker, who creates large industrial assemblages of rubber and steel. I admired their ability to tell a story through their artwork and use of nontraditional materials.

When my kids left for college, I went back to school too and completed a second degree in interior design.  After exhibiting my artwork for a decade there was a need to find some practical applications for my artistic abilities.  Fortunately I met Pat Morrisy who, also a patron of mine, thought I might be the right person to bring his vision to life for a new restaurant project in Orange, NJ. Pat is the Executive Director of Hands, Inc, a nonprofit Community development organization.

I was able to bring my artistic sensibilities to the design of the restaurant Hat City Kitchen. As the restaurant was meant to have a southern Cajun style and menu, I tapped into my love of the famous African-American Gees Bend quilters of Alabama. I made a large and prominent quilt for the backdrop of the main stage. Many wonderful musical acts at the restaurant have performed in front of this Gees’s Bend-inspired quilt.  Some of my hand-crafted assemblages also hang on the walls to help create a home-spun ambience. Wall colors were carefully chosen to reinforce the regional folk culture of the south.

My love of folk art came full circle in the design of the Hat City Kitchen restaurant. After all, folk art reflects traditional art forms of diverse community groups — ethnic, tribal, religious, geographical, as well as time-worn and rooted values.  I’ve been lucky enough to work with Pat in a few more projects. The Hands vision is to help revitalize the town of Orange and create a Valley Arts District.  Once considered the hat making capital of the world, the Orange Valley continues the tradition of fostering a creative community. 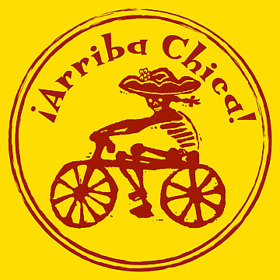 Kimberly Maier’s art and designs are available through her online pillow shop on Etsy.

All images obtained from http://www.kimberlymaier.blogspot.com